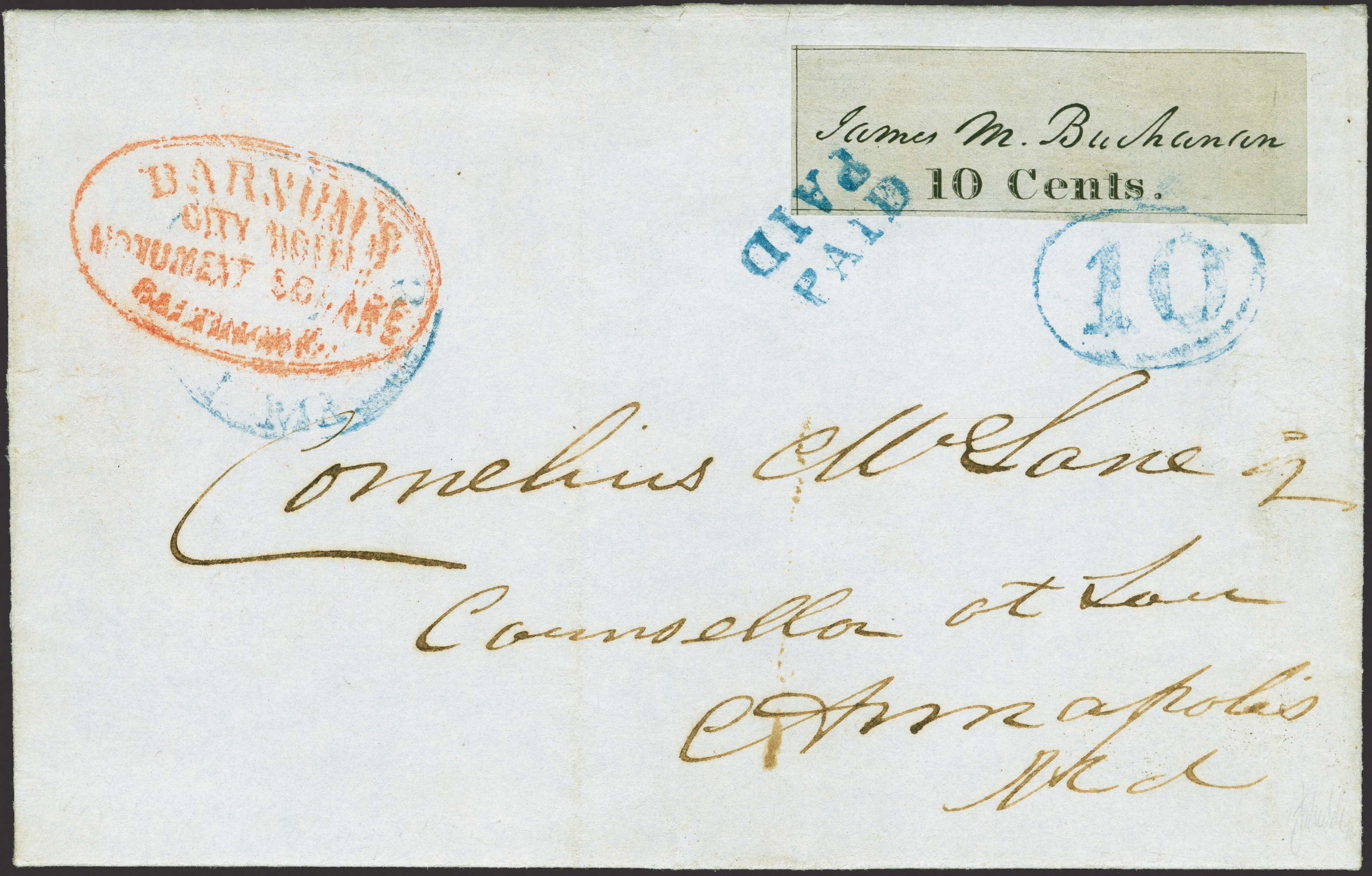 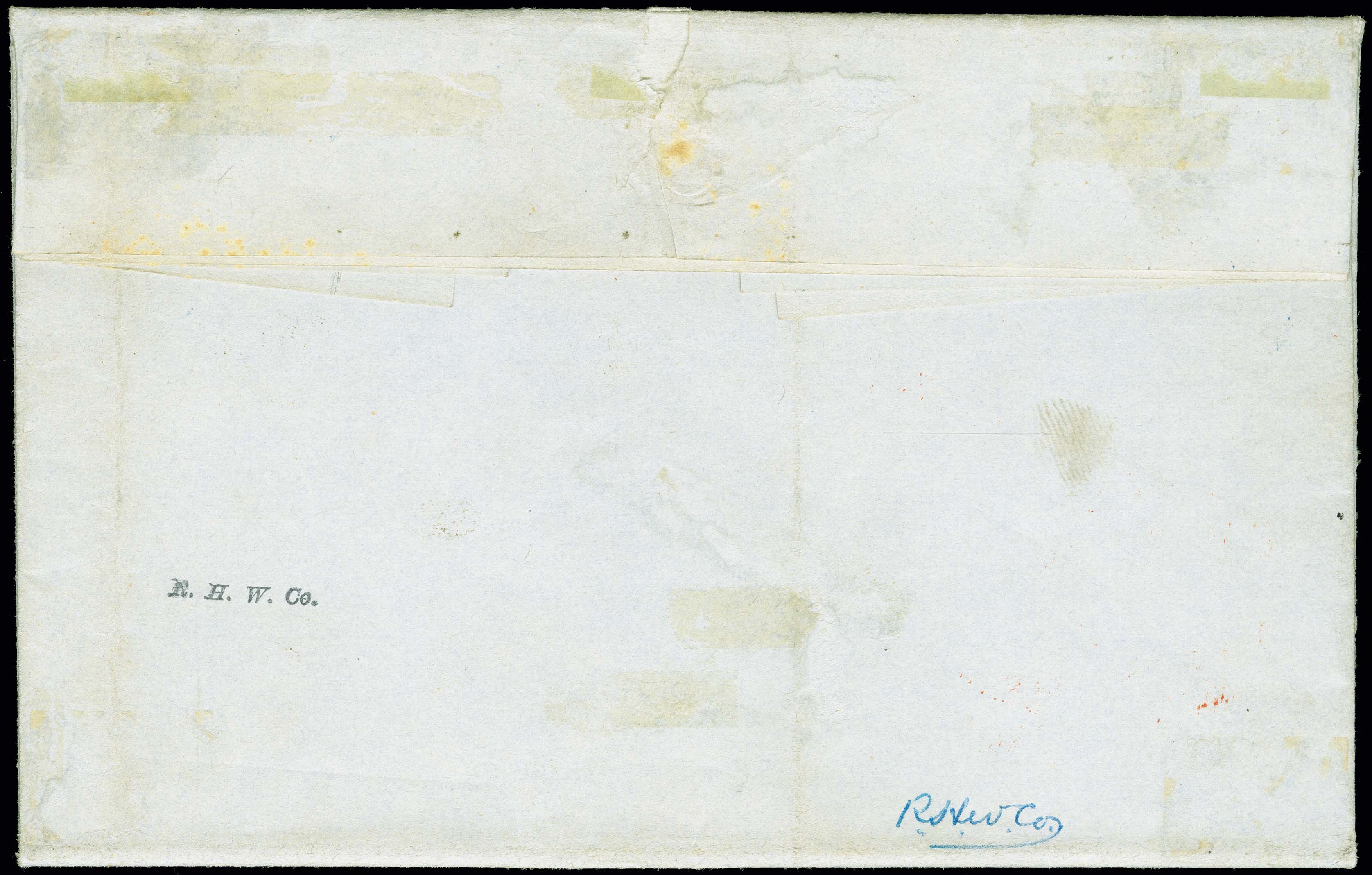 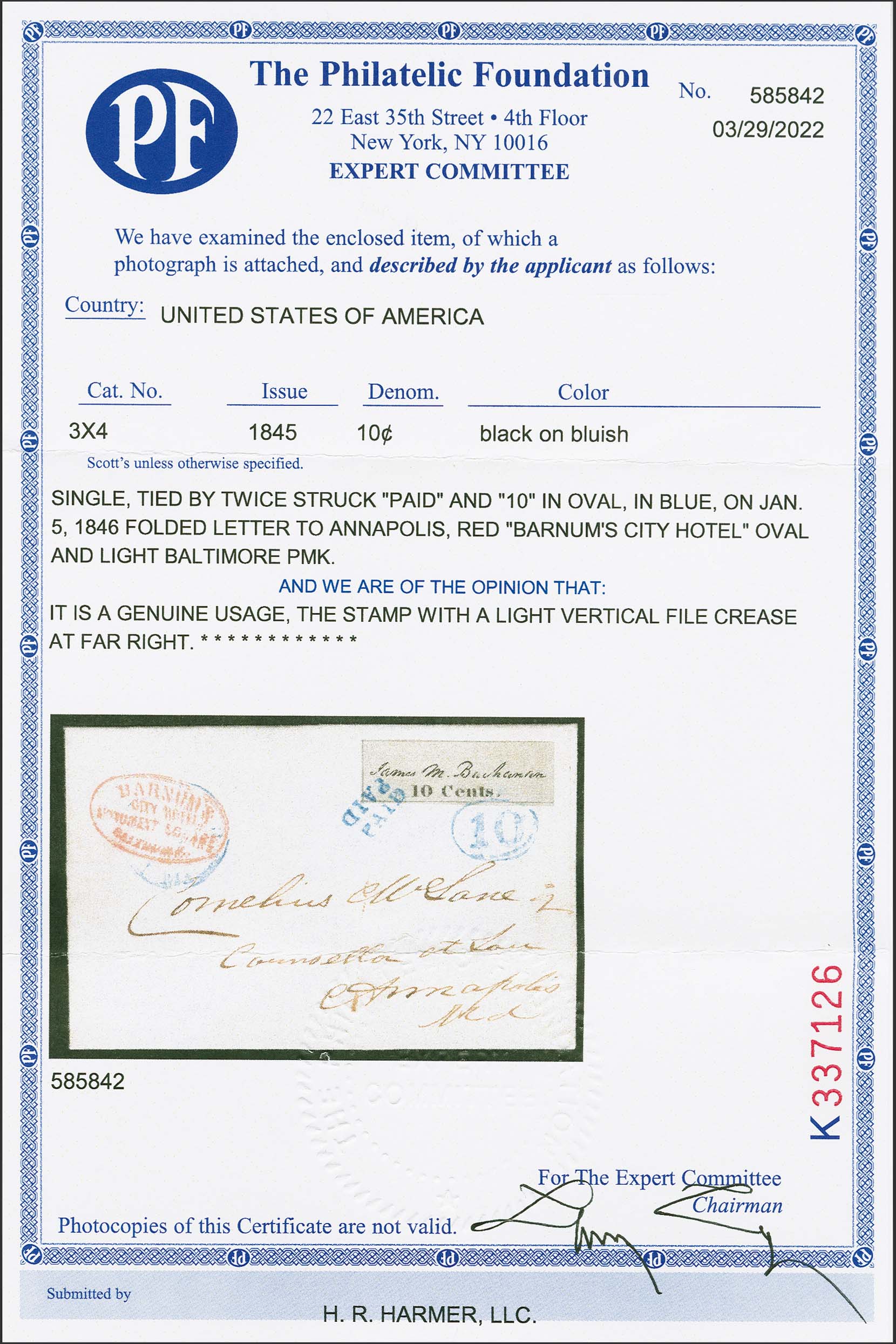 3X4, Baltimore, MD, 1845 10c Black on Blue, three full framelines, tied by two strikes of blue "Paid" and "10" in oval to January 5, 1846 folded letter to Annapolis, Maryland, red "Barnum's City Hotel" oval and light blue Baltimore postmark at left, stamp with a trivial vertical file crease at far right (mentioned for strict accuracy only), unique on cover with only one other known off cover, Hays census #1, USPCS census #20166 2022 Philatelic Foundation certificate (Scott listed but not priced on cover)
Based on known dates of use, it appears that the Baltimore provisionals on bluish paper predated the printings on white paper by at least several months (stamps on white paper do not appear until January, 1846). Postmaster James M. Buchanan was one of the earliest adapters to the use of adhesive stamps, with Baltimore's stamps being issued mere weeks after the postal reforms of 1845 took effect. Any 10c adhesive on cover is exceptionally rare, with just five examples of the 10c on White recorded on cover (three of which are faulty).
This cover, with an immaculate 10c on Bluish tied by three handstamps, is one of the most important United States Provisional items in existence, and has not been offered publicly since a 1975 Robson-Lowe Geneva sale (where it sold for 250,000 Swiss francs). The red hotel handstamp perfectly contrasts the blue postal markings and enhances the appearance of an already spectacular item. When the item's stellar provenance (Hind to Caspary to Lilly to Boker to Haub) is taken into consideration, we feel no hesitation in calling this one of the greatest American philatelic gems.
Provenance: Arthur Hind (Charles J. Phillips Sale 1, 1933)
Alfred H. Caspary (H.R. Harmer Sale 967, 1955)
Josiah K. Lilly (R.A. Siegel Sale 312, 1967)
John R. Boker, Jr. (Private transaction)

Harmers International With the continual encouragement of his former clients, who missed the presence of a Harmer family business in New York, Keith decided to re-enter the philatelic auction... Read More 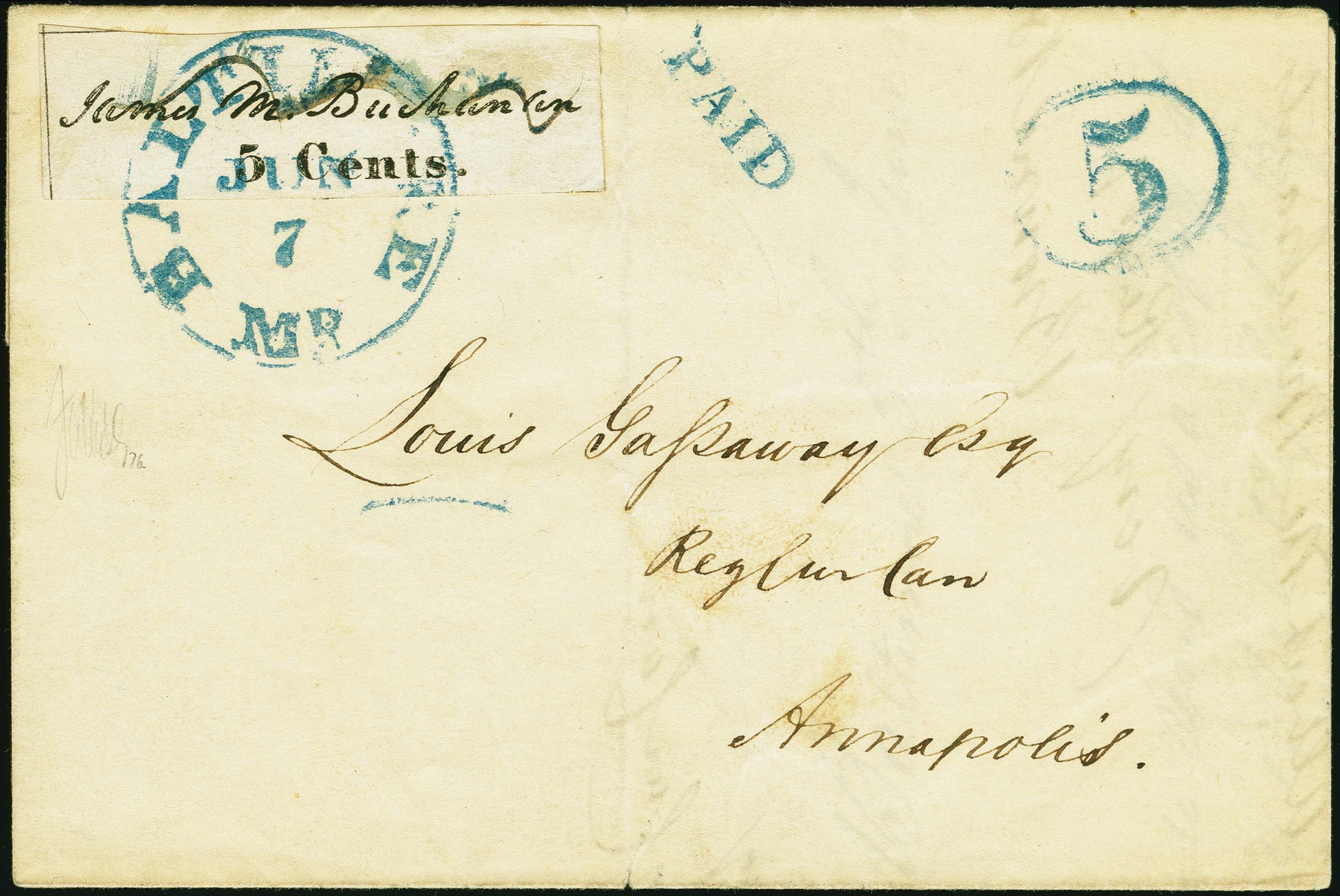 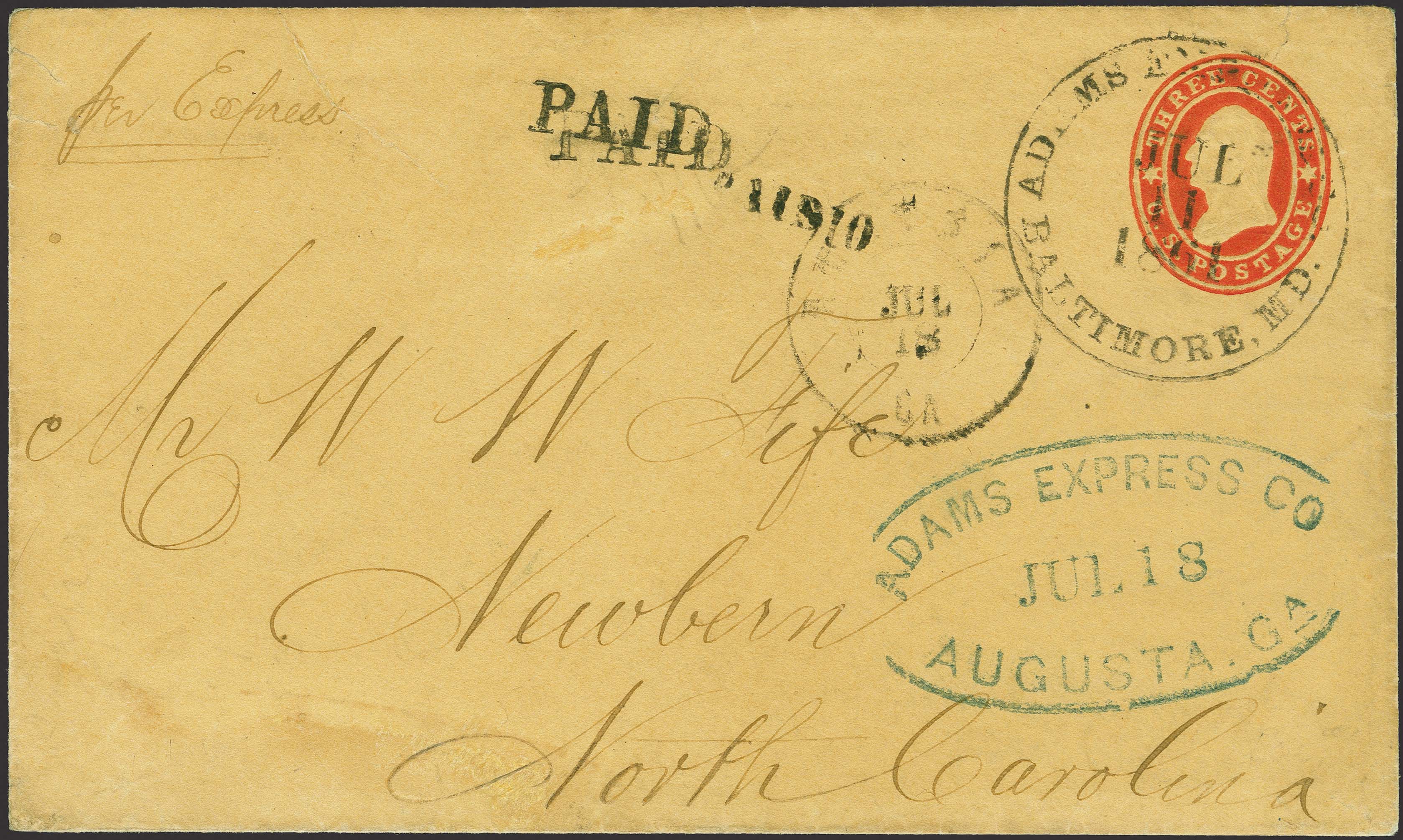 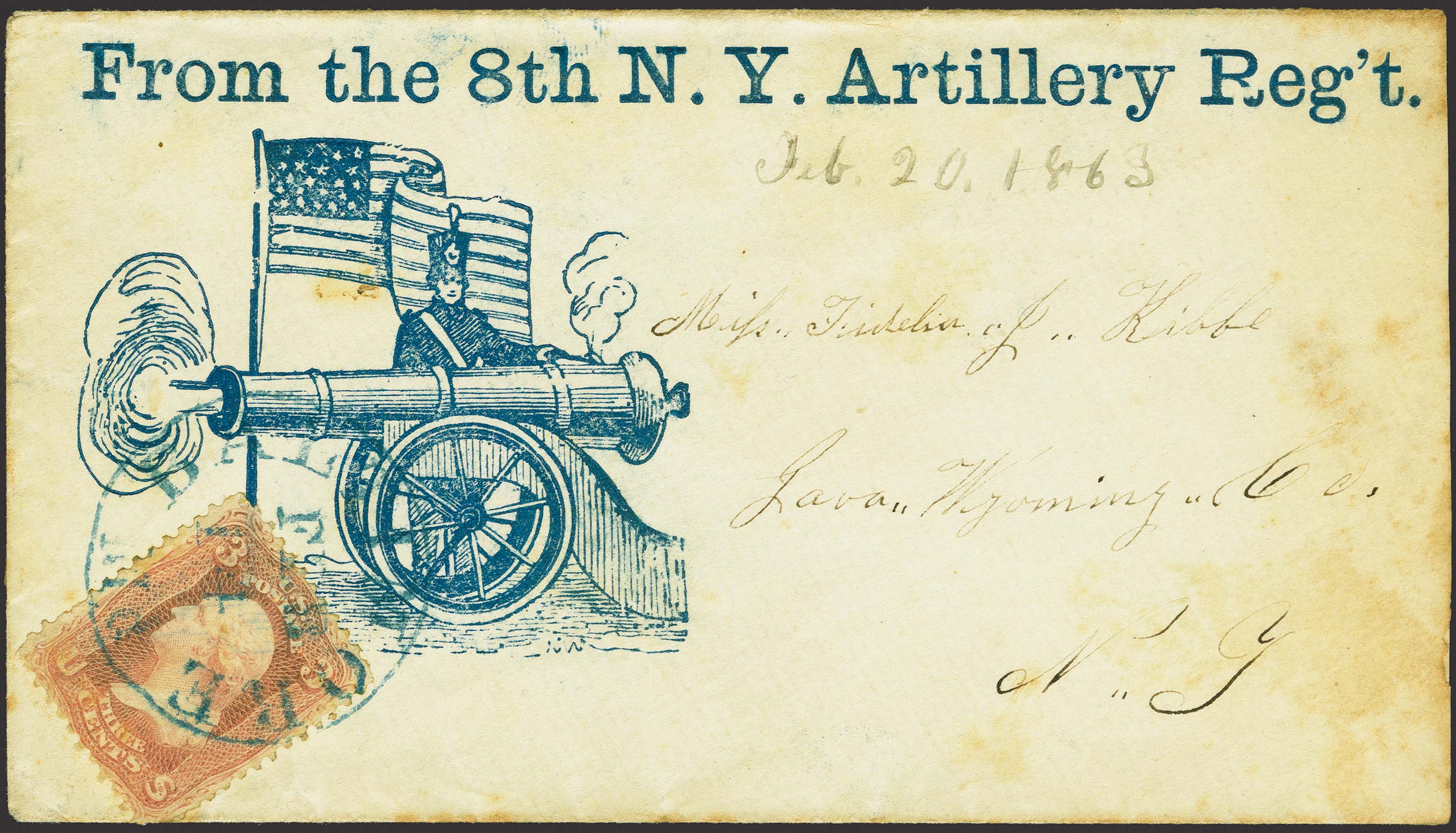 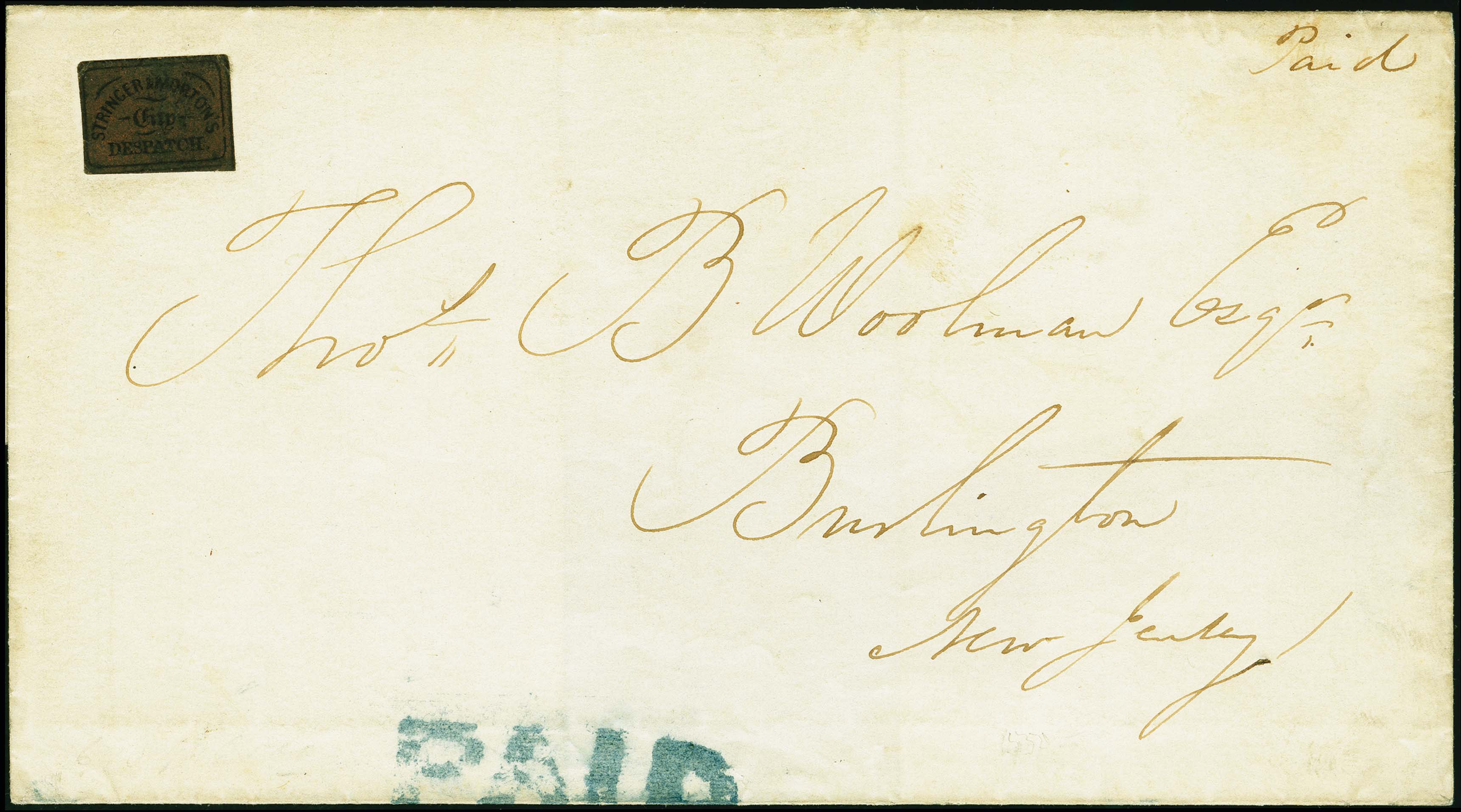 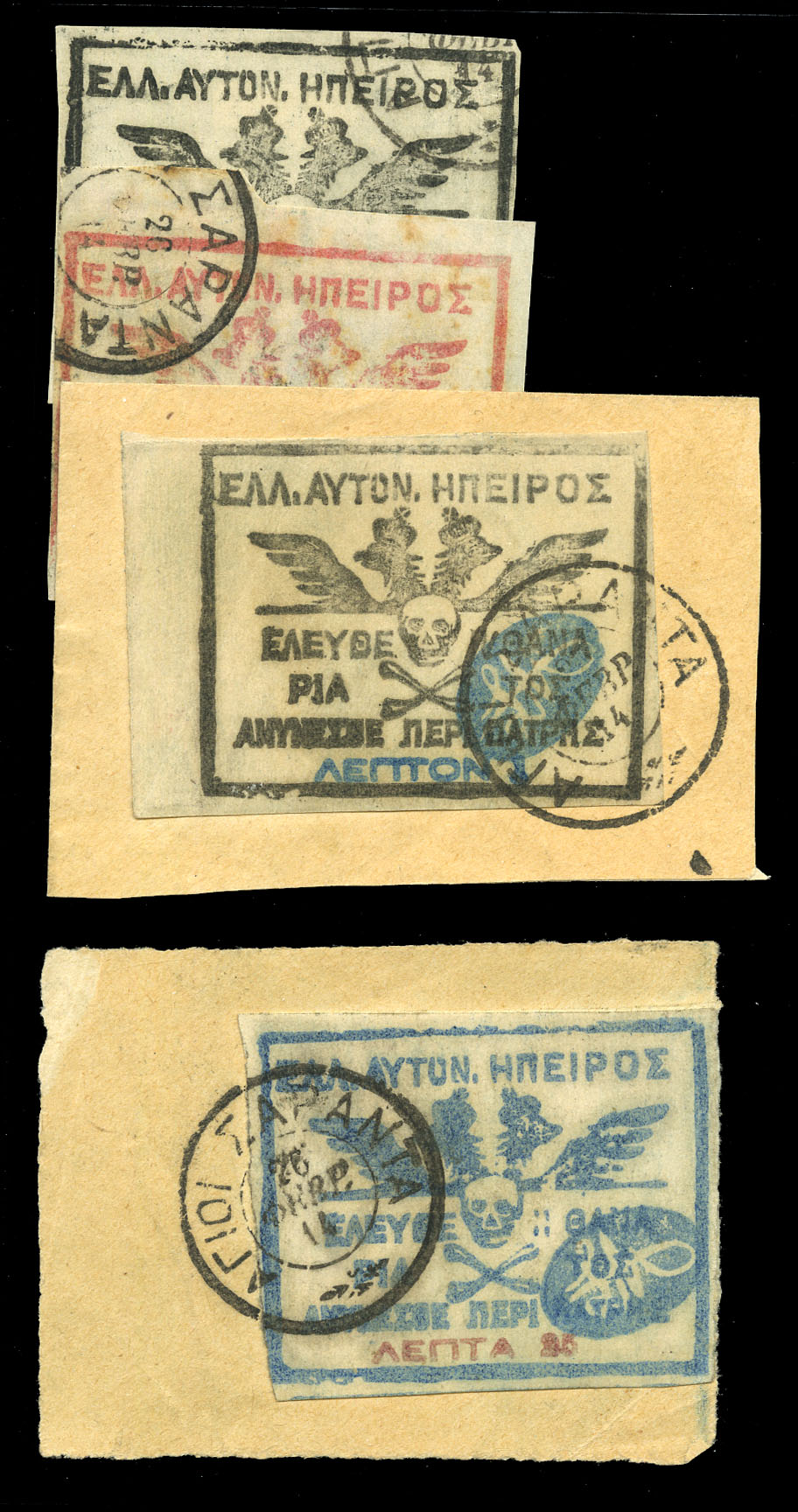 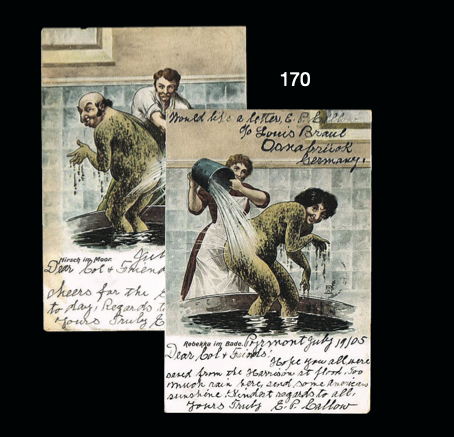 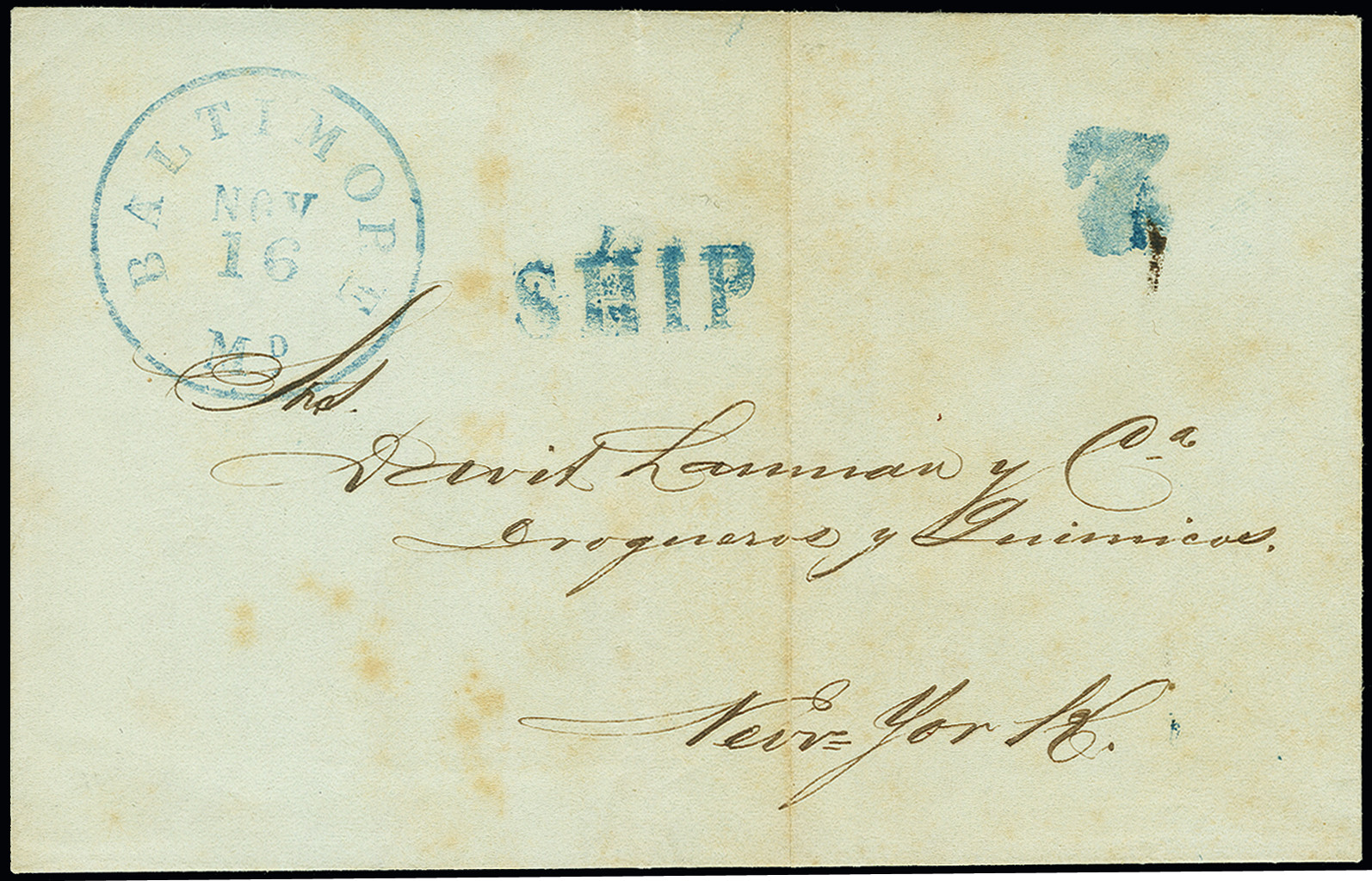 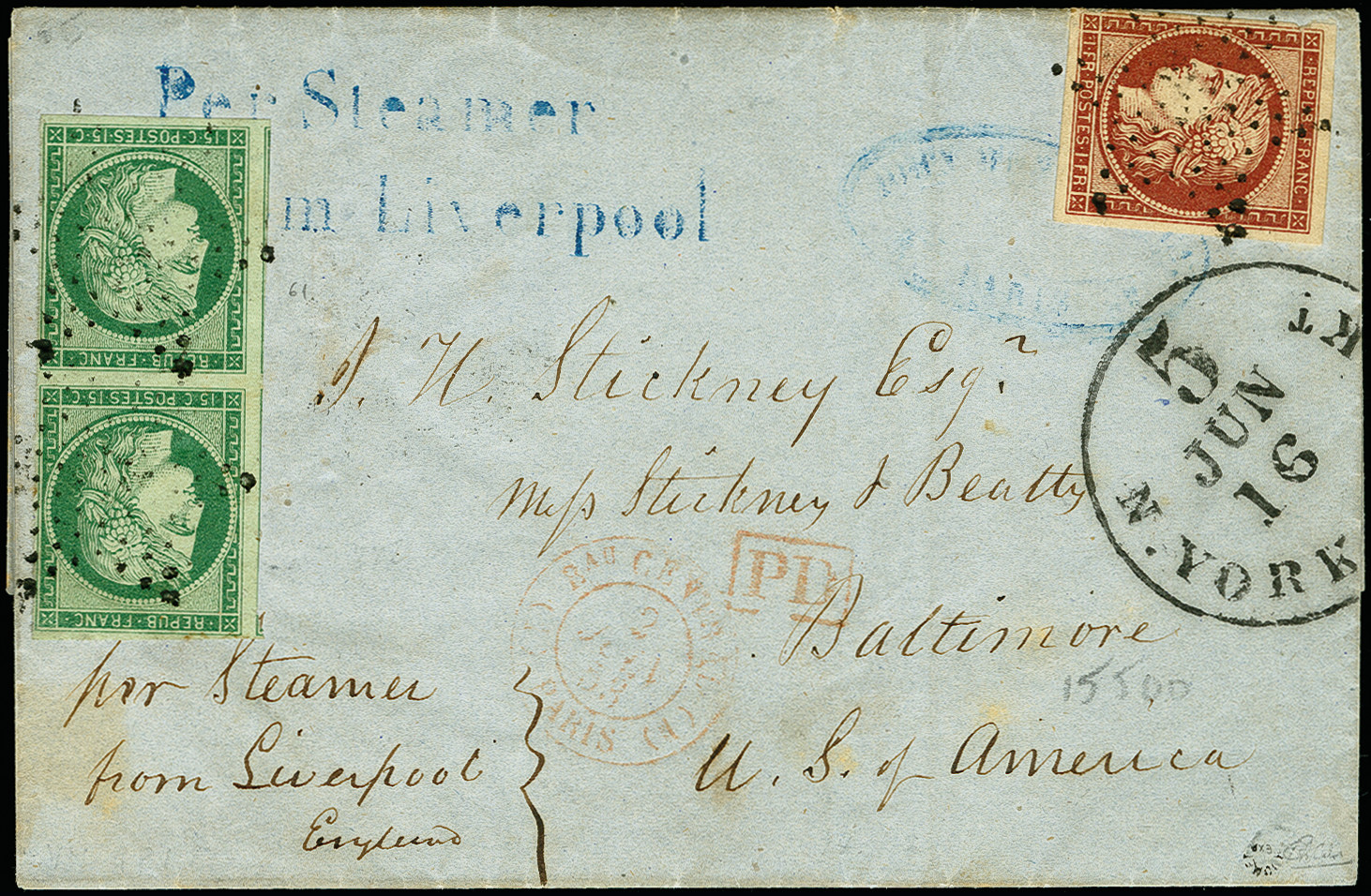